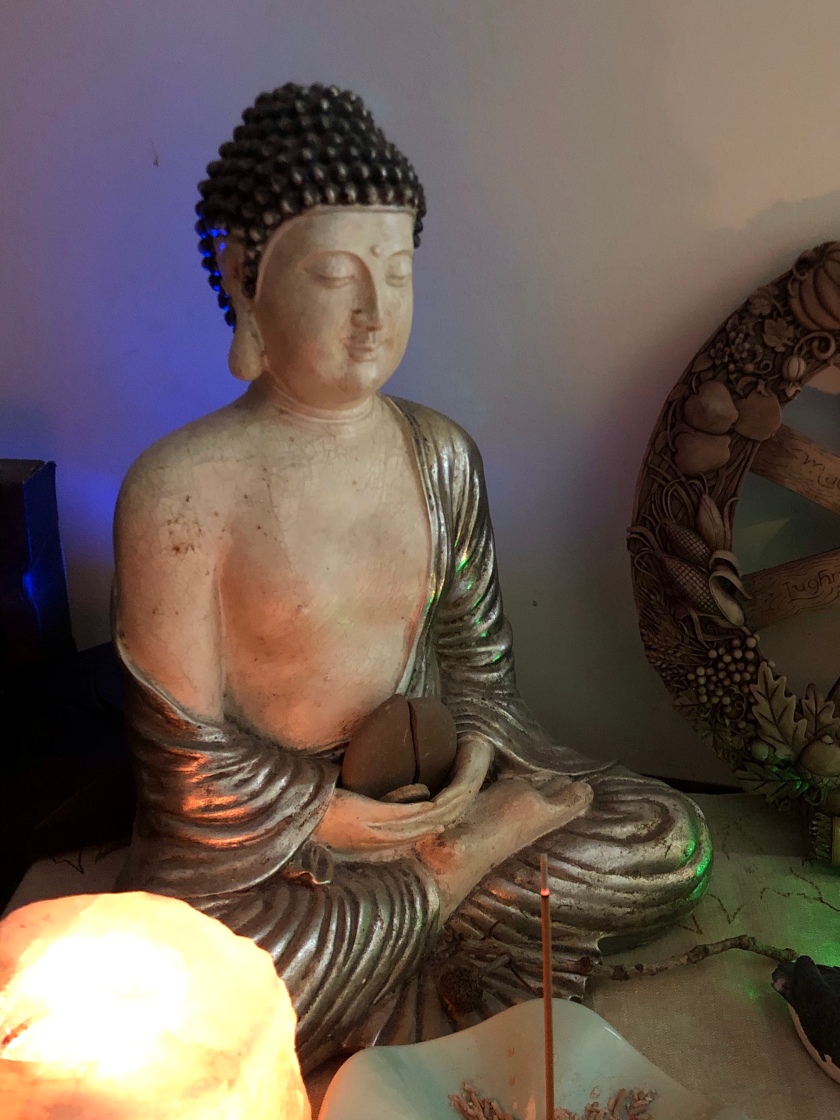 I’d like to tell you the story of my Buddha. This Sunday, I’m giving a sermon on Bodhi Day, the anniversary of the Buddha’s enlightenment. So I’ve been sitting with my Buddha a bit this week, thinking about my journey as a Buddhist and meditator (among, of course, other things).

First of all, he was a gift from my friend Cole, who happens to be Pagan, not Buddhist. I thought initially I would repaint him, but I haven’t done that. Yet? I may still. But I like him as he is, too.

The important thing to note here is the rock he is holding. I found this rock on the shores of Lake Erie when I went to see my parents after my brother committed suicide in 2017.

After Anthony died and I rushed to get a plane ticket and get home for whatever funeral arrangements had to be made, as the plane circled to land and I saw the lake, tears suddenly flowed. I don’t like crying in public places. Disembarking a plane wasn’t a comfortable place to cry. But the lake holds a lot of memories, and my brother at the heart of a lot of them. Dad had a boat out near the islands (Kelley’s, Put-in-Bay, etc.) and on the weekends he had us, when the weather was good, we would go out to the boat and spend the entire weekend on it, fishing, swimming, visiting islands, sometimes just tooling around. So many memories.

I live now in land-locked Tennessee, and there are lakes, but nothing like Erie. When I landed and my dad picked me up, the first thing I said was, I want to go to the lake. So mom, dad, my aunt, and I went the next day.

When we got there, I wandered away from the others and sat by myself on the rocks with the wind whipping through my hair, crying. Erie doesn’t have an enchanting salt air smell like the ocean does. It smells like fish. But it’s a smell I love. Eventually, I returned to mom and dad, and pulled out my phone and put on “Sailing” by Christopher Cross, which was sort of our on the boat anthem. Dad cried. I cried. It’s good to cry together sometimes, even if it is public.

Finally, I strolled along the sandy part of the beach and picked up a couple of rocks. This one was the smallest, the smoothest. It was perfect, really. And then, in my carry-on bag on the way home, it cracked in half.

I kept it anyway. In fact, somehow it seemed more significant, cracked, than the other stones that stayed perfect in my bag.

I didn’t find comfort in the story that my brother is in heaven, and my Jehovah’s Witness parents couldn’t even say with certainty that he would be resurrected to live with them in their New System/Paradise. Instead, I found my comfort in Thich Nhat Hanh’s book No Death, No Fear. This is among the many passages in it that comforted me and still comfort me:

“When I make a pot of oolong tea, I put tea leaves into the pot and pour boiling water on them. Five minutes later there is tea to drink. When I drink it, oolong tea is going into me. If I put in more hot water, making a second pot of tea, he tea from those leaves continues to go into me. After I have poured out all the tea, what will be left in the pot is just spent tea leaves. The leaves that remain are only a very small part of the tea. The tea that goes into me is a much bigger part of the tea. It is the richest part.

“We are the same; our essence has gone into our children, our friends, and the entire universe. WE have to find ourselves in those directions and not in the spent tea leaves. I invite you to see yourself reborn in forms that say you are not yourself. […]

“You do not have to wait until the flame has gone out to be reborn. I am reborn many times every day. Every moment is a moment of rebirth. My practice is to be reborn in such a way that my new forms of manifestation will bring light, freedom, and happiness into the world.”

One day I was rearranging the altar where I meditate each morning, and I set my Buddha at the center. I realized that he was holding his hands as if he was holding something. I looked down on the shelf and there was my broken rock, the broken pieces of me. I gently placed them into the Buddha’s hands and trusted that if I sit there and practice looking deeply, I will see that the broken rock is both the same as it has always been and that it will never be the same again.

I call myself Renaissance Girl. Technically this is the place on the web for Deanna Lack, writer... but I do a little of everything creative and I'm going to lay it all on you. View All Posts