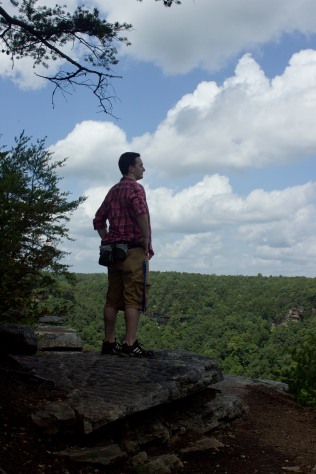 News first:  I’m going to college.  I’ve applied to Motlow State Community College, I’m in the process of working my way through red tape, and I start in the fall.  Tennessee has begun the TN Reconnect program that funds two years for returning adults who don’t already have a degree. After I have said so many times that my biggest regret is not going to college, I hardly have any excuse.  Well, I could have excuses.  It turns out I could have a lot of them. One of my biggest ones has always been, “but I don’t know what I want to be when I grow up.”  I’ve always been afraid of “majoring” in something because I am one of those people who “minors” in everything that catches my fancy.  Tentatively, though, I’m thinking of majoring in Art for my Associates and then going on to Appalachian Center for Craft/TTU for a fine art degree in metalsmithing (but I’m keeping my options open, of course).

So I am beginning college in August and my son Brandon (pictured above) is beginning his last semester of college before he becomes the first person in his family or stepfamily to graduate college, with a degree in Fine Art/Painting.  That’s a big deal. He has his whole future ahead of him.  He is currently in Boston experiencing the world, and I am immensely proud of him.

So I’ve been thinking a lot about futures and dreams and new beginnings.  About the legacy of dreams that we give our kids.

I was listening to a podcast last week, which was very inspirational about “you got this, you can do this, live your dream” sort of stuff.  They interviewed a jewelry designer who is working on a line of $300 handbags for Nordstrom to go with her manufactured line of jewelry.  So not in my wheelhouse.  Anyway I was listening to this lady and thinking how much she reeked of Privilege.

And it occurred to me that I, liberal hippie girl who just wants to make art and make the world a better place for all sorts of people, have a slightly different aroma (it doesn’t come from a perfume counter at a mall department store, it’s more like patchouli and dirt under my fingernails), but it’s still pretty solidly Privileged.  I’ll just take a sec to thank my stars and my husband for making it possible for me to even think about going to college.  I dreamed of it once before when I was a single mom but couldn’t make it happen.

Then I started thinking about that message, You Can Be whatever you want, if you dream hard enough and work hard enough.  We tell it to every child.  Disney has been selling it for a century.

But it’s not true.  I think we’re killing our kids with it.  An increasing number of kids who live in families who are not middle class, who cannot afford to send their children to college, or sometimes to even feed them adequately.  We tell those children that they must go to college to realize these dreams and then we sell them into indentured servitude to pay off the dream before they can realize it and, side note, tell them they can declare bankruptcy on any kid of debt except for college debt.  Sorry.  Keep working.  When are you going to have kids?

And then we wonder why they get depressed when their dreams fail, why they fall into traps of addiction or mental illness.  We TOLD them that they could have it, if they worked hard.

They DO work hard.  Kids in my son’s generation are working their butts off.  They’re graduating college, or trying to and failing, and then saddled with years and years of college debt to realize their dreams, which may or may not happen for reasons that have nothing to do with how bad they wanted it or how hard they worked.  Or something else gets in the way and they end up enslaved to a job Wal-Mart or somewhere in corporate America so that they can keep having health insurance.

This has gotten depressing.  I think what I am saying is, if we’re going to sell them this story, we need to back it up.  We need more states to be like Tennessee, who already has a program to give kids $4000 toward college each year if they keep their grades up.   I was thinking I was going to college anyway, but TN Reconnect sealed the deal.  We need to make community college free for the asking.  We need to put our money where our mouth is for these kids (and adults) so that we can mean it when we say, You can be what you want if you work hard.

I got political, I guess, when I was trying to be philosophical, even introspective.   But this should not be a political issue.  I’m really thankful that my state legislature, which I generally despise ideologically, and which has dropped some real legislative stinkers in recent years, has made this a priority for people who want to pursue college, all ages.

So here’s a toast to Tennessee, a hope that other states will follow suit, and maybe even the federal government, eventually.  Here’s a toast to our dreams and our kids’ dreams.  Here’s a toast to our parents’ dreams.  When I told my 75-year-old aunt that I was going to college, she was very excited for me.  She said she wanted to go to college so bad, but girls didn’t go to college then.  My mother wanted to go to school for Art, but was told that my grandfather “wasn’t supporting no starving artists.”   I guess it’s progress that we let our girls dare to dream that they can be what they want, maybe?  I hope that in a generation or two we can back it up.

So I’m off to study madly for a placement test in two days — I said, Brain, let’s go back to school, and Brain said, You realize you haven’t asked me to do Algebra in a quarter of a century, right?  It doesn’t matter.  Let’s do this, for me first, but also for all the women and men in my family who had different dreams that didn’t happen.

Happy Fourth of July, everyone.  Here’s to the American Dream, available to all.